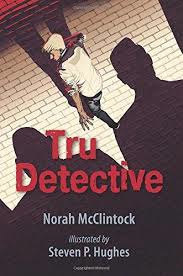 Truman’s parents are out of town, and he has made plans with his girlfriend, Natalia. When she doesn’t show up, he is angry. But when he finds out she has been murdered, Truman becomes the prime suspect. With no alibi, he must try to find the truth behind his girlfriend’s violent death. But the more he digs, the more he realizes he doesn’t really know who Natalia was, and he starts to wonder why she was interested in him at all. Hounded by suspicious detectives, angry Russian mobsters and a sense that nothing is as it seems, Truman is in a race to save himself. This is the second eye-catching graphic novel from award-winning author Norah McClintock.